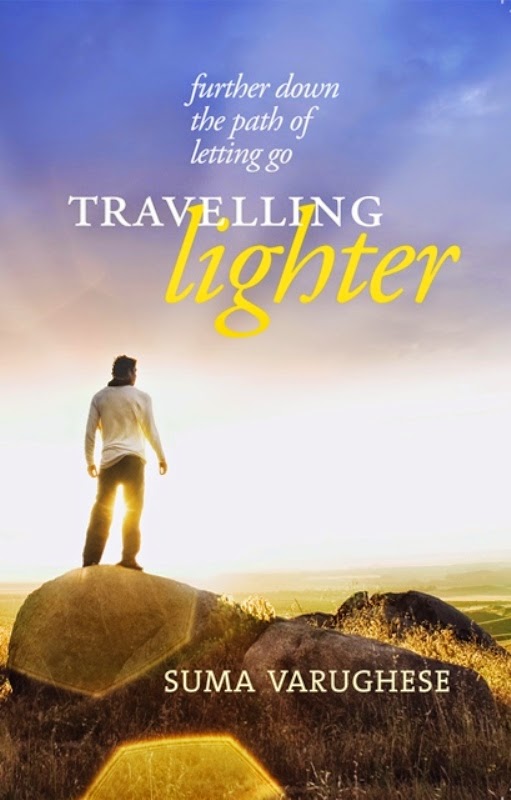 Suma Varughese’s second book, Travelling Lighter is more personal than her first book, which was a collection of her columns from 2001 - 2009, in Life Positive.

In this book, which again is a collection of her columns from 2006 – 2013, she recalls how she left her high profile job as Editor of one of India’s most popular life-style magazine, called Society, to take the jump into the unknown, as she took up the challenge of becoming the Bureau Chief of India’s first alternate magazine, Life Positive, in 1997. A hard decision in the face of what she was leaving behind her, Life Positive, among her own fraternity of journalists and publishers, was looked upon with doubt at that moment, and one did expect it to last not over a year. But there was a conspicuous growth of people who were hungry for a spiritual quest and waking up to a different dimension, who lapped up the magazine, making it one of the most successful magazine in that genre in India. The ‘inner journey’ had begun for Suma too. The ‘whimsical decision’ turned out to be a winner for Suma Varughese, who is now the Editor of the magazine.

Travelling Lighter is therefore a series of short, crisp accounts of Suma’s own journey with faith and the bold revelation of what day after day any Self-seeking individual is pushed towards – the act of living surrendered to a Higher Power.

The book is also an intimate revelation of a primal relationship she has had with her mother, the later Aleykutty Varughese, who passed away only a year ago in February. The living relation being the two ladies, one, the one who gave birth and the one who grew up to write this book, is a symbiotic one, which reveals that after years of being looked after by her mother, in her mother’s last years, Suma had the chance to return, to some extent the love and care she had received all these years from her. The book also deals with difficult emotions that one encounters on a spiritual path, emotions that weigh upon our path as seekers. When we leave the bondage of these emotions, we let go of the power they have upon us. Suma has had her share, with arthritis, asthma, IBS ( irritable bowel syndrome), which link themselves to emotions and in case of a spiritual seeker, become the base matter in the emotional body to release and let go, in order to overcome the physical byproduct of negative emotions. The stark honest accounts move you, because, the author, is a well-known journalist, with an enormous following. But as Devdutt Pattanaik, CBO, Fortune Group, says, “Suma’s columns are a seeker’s personal diary. The lofty becomes routine. The universal becomes particular. The infinite comes home. Jargon dissolves and a very lived wisdom emerges.”

The most poignant part of the book for me is the account of how, she along with her mother bought their home in Bombay. Suma had just left her secure job to take a jump into the unknown. But just then, with whatever she had collected and what she received from her mother, with a little help from her sister and a money lender, together the two ladies, daughter and mother bought the first home they would ever have in Bombay. It spoke of struggle and brought to mind the well researched fact that women can take risks in their lives and can initiate life changing decisions, when they have a roof over their head or a piece of land, they can call their own. This security surpasses none other in a woman’s life.

As the book progresses, it turns into a workbook with blank pages to note “Your Thoughts” which I found delightful.

I see the book therefore as one that can not only be read, but can become one with a practical use, thus taking it beyond its pages. Indeed, it is a book that can be used to be read out in a like-minded gathering and cogitated upon, to discover and journey into one’s on Self. And I wish it a Bon Voyage to that end.
Suma Varughese has informed us that through December 21, 2012, as fellow travelers on planet earth, we have transited the gateway to Divine Feminine consciousness that is now slated to influence the world. We can expect to have inherited better and balanced times.

Let us welcome and be the change!

About the author: Suma Varughese is the editor of Life Positive, India’s premier body-mind-spirit magazine. A veteran journalist with 34 years of experience, she was former editor of Society, a lifestyle magazine. A seeker in spirit, her first book Travelling Light received much acclaim from readers and resulted in Travelling Lighter. She lives in Mumbai, the only city in the country that she can bear to live in.