So why am I not surprised at the news that Fortis Healthcare Executive Vice Chairman, Shivender Mohan Singh is giving up his role to join the Radha Swami Beas movement in Beas, near Amritsar?

In reports found on this website  it is reported that the present Guru of Radha Swami Beas, Gurinder Singh Dhillon has made $ 254 million and the owner of Logos Holding Company which acquired 19.53% of Raligare Enterprises in 2010.

"The capital market regulator has granted exemption to Logos Holding Company from making an open offer to the shareholders of Religare Enterprises for its acquisition of 19.53% stake in the company. Logos Holding is an investment arm of the Gurinder Singh Dhillon family.
Gurinder Singh is the current head of one of India's largest religious sect – Radha Soami Satsang Beas. At Thursday's closing price of Rs 460.95, the value of Logos Holding's stake is about Rs 1,163 crore. The Dhillons had acquired the shares at just over Rs 13 crore in 2006. - See HERE

The said share holders of Raligare Enterprises are none other than, the two brothers, Shivender Mohan Singh and his elder brother, Mavinder Mohan Singh.

”Singh and older brother Malvinder Mohan Singh, 43, own about 71% of the company. The Singh family's stake in Fortis Healthcare is worth Rs 5,636 crore while its holding in Religare Enterprises is valued at Rs 2,693 crore based on current market cap.”

Read MORE
So now, when the Guru owns 19.53% stake in Raligare Enterprises, it is like coming home to where the business has always been. If Fortis was all about profits, then, going to Beas may not totally be for ‘seva’ only, in the light of the fact that Radha Swami Beas has come up with its own hospital at Beas and is actively urging followers to donate organs after death.

So is there a new business coming up then, for organs to be sold at exorbitant prices, within India and abroad?

The honourable father of the Singh brothers Ranbir Singh, left a legacy of shame, the world of medicine will loathe to forget. Thankfully, Wikipedia comes handy. Sample this:

During 2004–2005, Dinesh Thakur and Rajinder Kumar, two Indian employees of Ranbaxy, blew the whistle on Ranbaxy's fabrication of drug test reports. Thakur's office computer was soon found tampered with. Ranbaxy then accused Thakur of visiting graphic websites using his office computer, forcing him to resign in 2005. Thakur escaped from India to the USA and contacted the Food and Drug Administration which started investigating his claims.

As a result, on 16 September 2008, the Food and Drug Administration issued two warning letters to Ranbaxy Laboratories Ltd. and an Import Alert for generic drugs produced by two manufacturing plants in India. By 25 February 2009 the US Food and Drug Administration said it halted reviews of all drug applications including data developed at Ranbaxy's Paonta Sahib plant in India because of a practice of falsified data and test results in approved and pending drug applications.

On 8 February 2012, three batches of the proton-pump inhibitor Pantoprazole were recalled in the Netherlands due to the presence of impurities.

On 9 November 2012, Ranbaxy halted production and recalled forty-one lots of atorvastatin due to glass particles being found in some bottles. Also in 2012, an apparent dosage mistake was reported in which 20 mg tablets were found in a bottle of atorvastatin labeled as containing 10 mg tablets; this led in 2014 to the voluntary recall in the United States of some 64,000 bottles.

In May 2013 the US fined the company US$500 million after it was found guilty of misrepresenting clinical generic drug data and selling adulterated drugs to the United States.

In September 2013, further problems were reported, including apparent human hair in a tablet, oil spots on other tablets, toilet facilities without running water, and a failure to instruct employees to wash their hands after using the toilet.[17][18] Ranbaxy is prohibited from manufacturing FDA-regulated drugs at the Mohali facility until the company complies with U.S. drug manufacturing requirements.

Ranbaxy has cleared some regulatory approval hurdles with approval for production at various facilities. Its Gurgaon based plant & Romania R&D centres got FDA approval. Also in March, Ranbaxy's Paonta Sahib plant in Himachal Pradesh, which has faced a US regulatory ban since 2008, was also cleared in a joint inspection by five global drug regulatory agencies of the UK, Canada, the WHO and Singapore. (Credit Wikipedia )

It is believed that Daiichi-Sankyo were duped and were not aware of the liability they would have to bear in the US market. As soon as they had paid off the liability, they took the best step forward. For Daiichi, Ranbaxy was more of a liability, than a profit making venture.

It certainly is time to move on to the next “seva” venture, Mr Shivender Mohan Singh! Especially, when you come to think of who are the millions of followers who throng the dera in Beas – mostly the poor, the Dalits of Punjab and those who trust Guru Gurinder Singh explicitly.

Posted by Julia Dutta at 3:52 AM No comments:

Train on schedule but train not started! 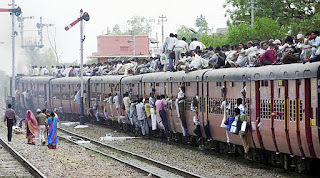 (Why Indian Railways needs to be privatized)

Twice this month, September 2015, traveling to Mumbai and later from Beas to New Delhi, I have witnessed a new phenomenon with the Indian Railways.

In the first instance, I was traveling to Mumbai, by a superfast train with only 5 stops in between. However, the train was late by 4 hours, arriving in Mumbai at an hour which completely ruined the entire days work, scheduled in advance.

It was not known to me, nor any announcement made on Internet, 139 Tollfree Indian Railways line, on newspapers or any other communication medium, that due to faulty lines and subsequent repair thereof, all trains travelling to Delhi or outside, running through Ballabgarh would be delayed by 3 – 4 hours for a period of a week. Had this been broadcasted, many passengers like myself would choose another route/or travel means to arrive at our destination, having cancelled our ticket, albeit late.

Further, the train scheduled to start at 8.30 pm, finally was rescheduled to 11.55 pm. Indeed, it did not start till, 11.58 pm and then went ahead and got stuck at Ballabhgadh for the next 4 hours!

How Railways make their money

Taking the above mentioned example, jJust look at the roughish Indian Railways – had the train started at 12 midnight, then it would have been mandatory for the railways to refund the entire ticket amount to each and every passenger on the train, because the ticket would have automatically been cancelled due to train not starting on the day it was booked for.

Second, that the train was late was not announced, till, the hour of scheduled departure, so passengers were left with no choice, except to wait for the train to leave at its rescheduled time. Or forgo the entire ticket money and return home. This would in turn leave empty berths which the Ticket Collector on the train could sell to people who board the train without reservation, rampant in India, still.

Not an exception but a rule

Indeed, the pattern is the same with all trains. There is no announcement that warns the passenger in time that the train is later, until the eleventh hour.

As it happened, I faced the same predicament when after a tiresome tour of Punjab, I waited to board the Swarn Shatabdi at Beas. Again, no announcement was made, till the scheduled departure time, that the train was late. When I checked the internet, it said, train on schedule time, but train not started. When I called 139, the Tollfree number, it said, the train is late by 2 hours! Again the passenger is left with no choice, but to wait.

Most people argue that the Railways in India is doing a great job. I beg to differ.

Given the fact that it is a Service Oriented industry, there are no excuses for poor quality food on trains, frequent delays of trains, lack of proper intimation to passengers on delays, exorbitantly priced tickets with no ROI.

Indeed, it is far better to travel by plane, but for the traveler who enjoys the train journey, to catch up on sleep, reading, relaxing, talking to fellow passengers, I guess the time has come to say, Goodbye, dear traveler! Our paths may never cross again….

Until the private sector take over Indian Railways, which is a monopoly, ailing, diseased and dying on a sick bed.


Picture: From the net

Posted by Julia Dutta at 9:15 PM No comments:

Pussy Love and the Subconscious 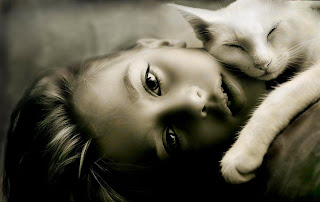 Doctors recommend a pet if you are alone or depressed. They say having pets is good for the heart. There is a constant yearning among humans to share love and affection, to become a provider and a nurturer to life, whether they come in the form of animals, plants, trees, dogs or cats.

I once had such a friend who was passing through some really bad time. Her dachshund filled her every moment of life with his constant presence. Like her, he was alone, never allowed to have a mate, never let out in the open without her leading him on the leash. He even went to work with her as she was self-employed.

As many stories you want to hear about animals and their human bonding, that many stories and more are available for you.

But I was interested in Freud and his interpretation of cats in relation to man and women.
It is not surprising that dogs seem to be a man’s best friend and status symbol, as a cat may be a woman’s best choice.

Looking up straigtdopedotcom HERE  I came across some very interesting answers. Let me quote in Dogs VS Cats – A Freudian Theory.

Spoke said: “I have this theory that women tend to prefer cats as pets because cats exhibit "typical" or "stereotypical" male behavior: emotionally detached, independent to the point of being distant, cuddly - but only when they want to be, etc. etc. Similarly, I think men prefer dogs as pets because we see in dogs various "female" (or idealized female) traits: nurturing (always there for you when you need 'em), unconditionally loving, plus they will fetch things for you!

Cher3 said: “I think statistics would probably bear out your observation about preferences, but you could just as well argue that women like cats because they are graceful and fastidious ("feminine" traits)and men like dogs because they are hierarchical animals who like to hang around in packs ("masculine" traits). Of course, it's typical of Freudian explanations for things that you can twist them to come out anyway you want.”

Further Cher3 continues: “I think statistics would probably bear out your observation about preferences, but you could just as well argue that women like cats because they are graceful and fastidious ("feminine" traits)and men like dogs because they are hierarchical animals who like to hang around in packs ("masculine" traits). Of course, it's typical of Freudian explanations for things that you can twist them to come out anyway you want.”

But really where the cat deification came from was Egypt. Freud might have got his inspiration from there, with four daughters of his own too.


Photo Credit HERE
Posted by Julia Dutta at 3:24 AM No comments: