Death by its very nature has always fascinated man. If there is anything certain about life, it is that it is finite and will come to an end. Though despite this seeming simplicity, man has never been able to tell what happens at the point of death and thereafter.  Death remains a grand mystery. No one has ever been able to go on to the ‘other’ side and returned to tell the tale.  Hence, since it is the final adieu, man looks to honoring the departed ones and presuming that there is an afterlife, providing the departed with every convenience that he was used to in life.

Thus arose the concept of tombs.

Tombs, by description are houses, chambers or vaults for the dead. In prehistoric times, the dead were buried in their own homes. Gradually, the dead were taken outside their homes and their final resting places became grander and more opulent. In different parts of the world, the tombs designed, varied in shape, size, design and concept.

One of the earliest instances of a tomb was found in Newgrange in Ireland. A mass grave.It was built in the Neolithic period around 3200BC. The structure consists of a large circular mound, 249 ft across and 39 ft high and covers 1.1 acre of ground. Within the mound is a chambered passage which was accessed by an entrance on the south-eastern side of the mound.  At the end of the passage are three smaller chambers off a large central chamber with a high, corbelled vault roof. Presumably, the bones of the deceased were deposited here in the large flat ‘basin stones’placed on the floor.
The mound is contained within a retaining wall in the front, which is ringed by engraved kerbstones. It was designed to align with the rising sun and light floods the interior chamber on the winter solstice. 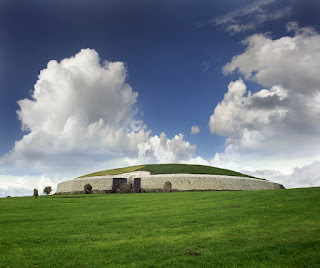 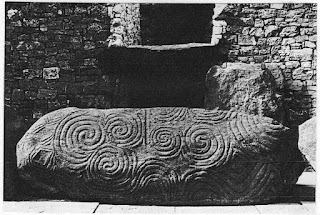 Situated on a large bend of the mystical Yamuna, the city grabs you by the collars of your eyes as you enter it. Every corner and by-lane tells the passionate story of a love that transcended time and place and manifested itself in a gorgeous tapestry, which continues to fascinate man through the centuries.

Where death is the only destination at the end of the path called ‘life’, here indeed is a celebration of that destination. An emperor paid his tribute to his lost love and the tears of his grief laid the foundation stones of the monument that came to be acknowledged as the most brilliant and indeed, iconic manifestation of the Mughal dynasty’s design aesthetics.

As his favorite queen, Mumtaz Mahal, lay breathing her last,she bound Shah Jahan to a deathbed promise that he would build her the most beautiful tomb ever known. The heart broken emperor poured his passion and immense wealth into creating a mausoleum whose lingua franca was just love.

Designed by architects Ustad Ahmad Lahauri and Ustad Isa, the TajMahal follows the design traditions of Persian and Mughal architecture. Simply put, the floor plan of the TajMahal is completely symmetrical on all sides, so that it looks exactly the same regardless of which side it is viewed from. It is a pristine, large white marble structure with an arch shaped doorway topped by a large dome and marked with a finial.  A finial is a decorative device, which in architecture, is employed to emphasize the apex of a dome or spire. The finial here is gilded and characterized by both Persian and Hindustani design elements.

The base is in the shape of a cube with chamfered corners, making it an unequal sized octagon, with each of the four long sides being approximately 180ft in length. The huge arched doorway or ‘Iwan’ is framed by a large vaulted archway with two similarly shaped arched balconies on either side. This motif is repeated on the four chamfered edges which contributes to the symmetry of the structure. Four minarets frame the tomb, one at each corner of the base facing the chamfered edges. These minarets are made to lean a little outwards, to prevent them falling onto the main structure in case of an earthquake. While the actual graves of Shah Jahan and Mumtaz Mahal are at a lower level, the false sarcophagi are housed in the main chamber. The central dome is 58 ft in diameter and rises to a height of 213 ft. The entire structure is decorated with with flowers and calligraphy inlaid into the marble with precious gems like agate and jasper. The whole effect is that of a precious gem more beautiful than a dream and tells a love story which touches every heart……all without saying a single word. 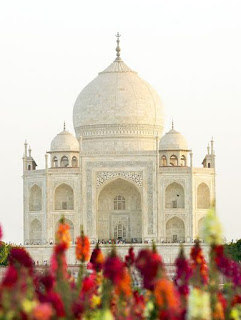 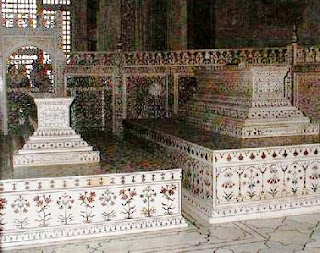 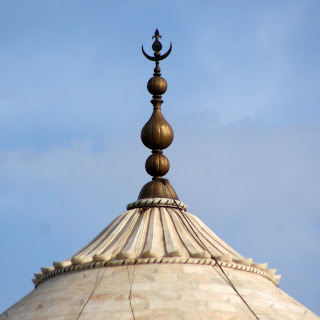 Myths and legends surround this structure, which is steeped in romance and mystery. But then they are just that. Mythsand legends. There are no facts substantiating them. Just speculation. These stories have only added to the mysticism of this most famous tomb and as the famous poet Rabindranath Tagore has aptly described it, the TajMahal has remained a ‘tear drop on the face of time…shining and undefiled’.

THE PYRAMIDS EGYPT…the land of mummies, pyramids and hieroglyphics.

Home to that very ancient civilization where pharaohs reigned and where the dark mysterious Nile, the venerated river that formed the umbilical cord that tied the ancient Egyptians to their land, flowed. The land where the sun God Ra sailed across the heavens in his boat to create the day and the night for His people on land.

In this land were built those famous tombs that the world knows as Pyramids. Massive structures that held inside them the bodies of the deceased pharaohs along with gold, jewellery, treasures, food and many other conveniences and effects to aid them along their journey to the afterlife.

The pyramids, known as Mir by the ancient Egyptians, were royal tombs and were considered to be a place from where the spirit of the deceased pharaoh could ascend, and could, if it so chose, return to earth. To help the soul recognize its place, a life-sized statue of the king was placed in the pyramid. The very shape of the pyramid represented the rays of the sun and they were faced with highly polished, reflective limestone in order to give them a brilliant appearance.

The Egyptians believed that the dark area of the night sky, where the stars danced, was actually a physical gateway into heaven. In the design of the pyramid, there is a narrow shaft that extends from the main burial chamber, through the entire body of the pyramid and points directly towards the stars. It was through this shaft that the spirit of the pharaoh travelled into the immense beyond, straight to the house of   God. 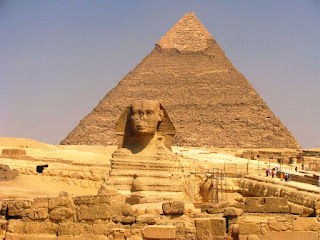 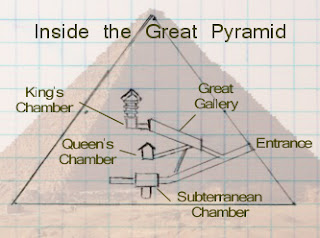 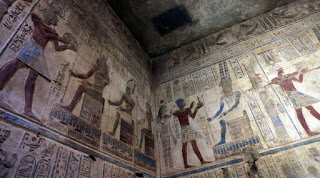 WALLS OF THE PYRAMID DECORATED WITH HIEROGLYPHICS Picture Credit HERE

About the author: Amrita Kangle studied Building Design and Architecture at Sir J.J College of Architecture, Mumbai, India. She is the Founder of Amrita and Priyanka Associates, the Award Winning firm in Mumbai. She is a voracious reader and writer of enormously humorous writes on day-to-day life. She lives and works in Princeton, New Jersey, USA as a Realtor while her love affair with bricks and mortar continues to flourish. Check out on her website: http://amritakanglerealtor.com . You may also like to look her up on Facebook  Click HERE

Apart from being a Realtor, she obsesses on, first, her son, and then her husband . And food. The last two are interchangeable she says, depending on her mood.

Posted by Julia Dutta at 4:12 AM No comments: