Many people may be interested in watching this path breaking film by Rituparno Ghosh. So go ahead and enjoy!


Watch the full film on:
http://www.youtube.com/watch?feature=player_embedded&v=An7ZZ5nIVEU

My perspective of the film:
http://juliadutta.blogspot.in/2012/08/film-review-chitrangada-by-rituparno.html

The challenge of One 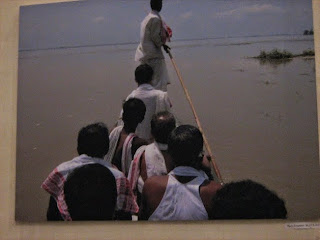 Reality stares you in the face, when you least expect it.

An afternoon siesta, which is a luxury for only a few in urban India today, lead, Nandita, to wake with a dream she least expected to have. In her dream, she found herself in a different state of being, surrounded by nothing except a feeling of oneness with herself. She had around her, her mother, father, brothers and sisters, her partner of many long years and yet she knew that they had no meaning to her life. It was strangely liberating! Waking up, in a state of deep solitude and aloneness, she recollected her dream and instantly was bound once again to all her relations, with a sense of bewilderment as to why this dream appeared at all.

Recently, I fell ill with very high fever and was bed-ridden for two days burning in hell. As part of my self-healing body process, for the last three years I have not been to a Doctor for Cold and cough, fever and runny stomach, because, I firmly believe that these are the body’s own reaction to throwing out toxins from inside and in reality, they are good for the overall cleansing. So I depend on Crocin for fever, steam inhalation for cold and lots of water and mattha ( curd with a lot of water) for runny stomach. It has worked wonders for me. Given time and rest, I revive, fresh as the early morning flower in bloom.

But the small family which is mine gathered around me panicking.  My partner called friends I am deeply attached to who in turn called me and pleaded I must see the family doctor right away. I promised but of course did not. My sister called from Kolkata and flew into a rage – how dare I be so cheeky to not listen to anyone?! Soon my elderly aunt followed with call from Kolkata, to say the same, only she tried to cajole me to see the doctor.

Of course I stood my ground and did not go! Next day, I was fine. The Crocin had done its work but I was washed out. I lay limp in bed for another day, then stood up on my feet and did what I love to do – went to work! My sister called my partner and said – “We are so far from her; I am so happy, you are there for her.”

Rubbish! Finally, we are all alone. There were many years I lived alone in Mumbai, absolutely alone. In one such time, I developed malaria and was “flying high” in the air with such high fever that when I stood up, I could not feel the ground. My neighbor, who had the keys to my flat, having not seen me over the weekend, turned the key to my flat to find, I was burning with fever. Along with her husband, she carried me literally to a Doctor and had my blood tested. I had malaria. For the next three days, they both took care of me, feeding me, bathing me, etc. They were the angels who helped me up again.

As such, like Nandita’s dream, one is actually alone, all the time. The connections we make in life, come and go. What we think permanent is constantly changing. What we do not expect shows up in moments when we do need them. Thus, the reality is permanent that nothing and nobody in our lives are there forever. Yet, we would find it hard to live, if we knew and accepted that we are, actually all alone.

There is a story, which is the last one in my collection of short stories called One. The book is called Until death do us part. The dilemma of being single, alone as it were in a society where we are never alone, so to say, is the theme of the story. Yet, even in a crowd we are alone; by ourselves, too, we are alone. But, when we think about it, it is difficult to put ourselves in such an isolated space. It challenges our thoughts and shakes our very being.
It only takes a shift in our thought process that makes a reality, more acceptable. I wonder what you think is the “sense of aloneness” from your perspective, from where you are in your life’s journey?

Posted by Julia Dutta at 5:37 AM No comments: