Book Review: The House Of Oracles by Chandini Santosh 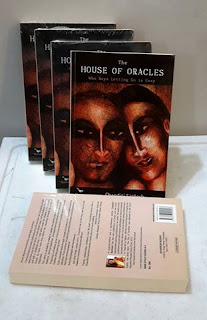 A four hundred years old temple sits in the Manikoth House, whose shrine has not been opened for many years. The house which used to host the annual Theyyam festival where animal sacrifice was a norm along with the dance of The Oracle, is now closed because the key to the shrine is misplaced. It requires The Oracle to come in to find it and open the doors to the shrine, where a strange idol, neither God nor human, made from wood, sits on a stool. The Oracle would dance and then become the voice of the divine speaking to man.

In a tale that covers tradition, customs, mores and values that have travelled down over generations, grandma Panchali, the matriarch, of the Manikoth House, begins the story at the very beginning of the book, crafted to perfection in the hands of Chandini Santosh, in her debut novel, The House Of Oracles, to cover, family, relationships, traditions and life in the house, that represents the past strongly holding on to the past, even as the new generation breaks out from the past and makes fresh beginnings within the same premises.

The two daughters in law of the matriarch symbolise the beauty of the past, while the new generation, a girl, Nanda and her three brothers, of whom, only one survive, are the face of the new generation, who neither marry within their community, nor follow the family business, Salem Textiles, which is now defunct, because the men in the family, like the money they have been left with, but are too lazy to run a business, since their father, the old patriarch died a year ago.

In the meantime, Nanda and Kishore marry outside their caste and it would be interesting to know, how the old matriarch, who is the symbol of tradition dearly kept close to heart, is going to take this in her stride. Would the two grand children be excommunicated from the Manikoth House, or would they be taken into its folds nevertheless. What would happen to Salem Textiles Building, in the face of the land around the house being sold to the church, because the matriarch’s sons are unable to continue the once thriving business that once fed the inhabitants of the house?

While the carefully crafted story, is an anthropologists delight in the clearly drawn out details of life, rituals, practices of a society deeply rooted in its tradition, maintaining the past and welcoming the new, there is a heart rendering sense of loss, even as the budding freshness of newness blossom as Salem Textile Building taken over by Kishore and will soon emerge in its new avatar? Will the matriarch live to see this breakdown, or will she like the old tradition decide to take leave of her body? Death, decadence, are a part of all things, but, here, at the Manikoth House, what has The Oracle got in store? And what will the Gods speaking though the tongue of the Oracle say to those who survive to carry forward the generations? It is a treasure to be discovered...

“Where do you think the treasure is hidden Yamuna mami?” Nanda asks.

“Everyone has to find their own key to the treasure; everyone’s treasure is different.” Yamuna, the able daughter in law of the house responds.

An important message follows, which the reader must carry along: just like the old temple shrine could not be opened, because, it needed The Oracle to come and find the key to do so, similarly, the key to the treasure within, must be found by each one. And each one has their on key to their treasure. And The Oracle in each life is different.

For this deeply philosophical stand, with which the reader can close the book, one must thank the author profusely for the thread of eternal hope she leaves the reader with, each reader, who will find their solace in this book.

There are a few observations I have: This being a book located in Kerala, and steeped with culture and tradition, there ought to have been accompanied with a glossary. Indian authors, writing in English, have decided not to be apologetic about this. They leave the reader to find out meanings of words they cannot understand. Therefore dear reader, I must urge you to look up Google for The Oracle, before you go on with the book. Also, Theyyam and the meanings of these words in the context of the culture, which is a rich heritage in Kerala, India.

Poet, painter, Chandini Santosh has to collections of poetry and also much appreciated painting exhibitions to her credit. Her poetry has also appeared in many anthologies as well as the Literary Survey by Kerala Sahitya Akademi and in Inspired by Tagore (British Council-Sampad). This is her first foray into fiction novels. She has many short stories to her credit though. This novel, written in the present tense has taken a decade to take birth, and is a work of much deliberation. The exceptionally evocative cover design is charcoal sketch by the author herself.

The book is published by, Archana Jain for Sparrow Books (www. Sparrow-books.com)

Posted by Julia Dutta at 2:38 AM No comments: