Daddy - A Living History of Brahmapur. 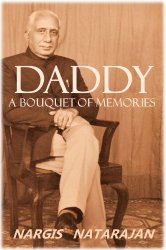 Before you download this book on your Kindle, click on Nargis Natarajan  to get to know who the author is.

As a personal story, and a dedication to her father, the book gives the reader a full view of ‘a now happy – now sad’, big Indian joint family with many characters, children and pets. And of course a good laugh almost all the way.

When I downloaded the book, I thought I would have a glimpse into a traditional Indian family which almost built Berhampur, also known as Brahmapur (Wikipedia) from scratch.  But what I fell upon is a modern, progressive family which was headed by a great visionary, a patriot, educated and progressive doctor, Dr Firoz Ali and the story of his large family and his contribution to a city he loved so much- Brahmapur. It is sad that he lives in every space we see today in Brahmapur, although his name has become unknown to most.  Daddy, A Bouquet of Memories is a history of his work as a Social Worker, a dedicated doctor, a poet and nation builder, as told by his daughter. It is the story of the man for whom, his Brahmapur was his life and light.

Better known as ‘the poor man’s doctor’ Dr Firoz Ali, gave up his Government Medical job to serve the people of Brahmapur. A freedom fighter, proud of his country and his city, Dr Firoz Ali contributed in each and every way to build the city, although if you google his name today, all you find is one or two references. Considering that at one time, the Brahmapur Railway Station was named after him, it is sad how names, persons are deleted from our histories as if they never existed at all.

"I went towards Dr. Firoz Ali’s residence. A three storey building now stands there. There is nothing imperial about it other than the name “Imperial College.”

“It may be noted that due to untiring efforts of well-known social worker Dr. Feroz Ali, the long-cherished dream of Brahmapur citizens for an auditorium became a reality in 1977.”

History is built around people we want to remember, or what someone, somewhere thinks is worth remembering and passing on. Living histories are wiped out which is why, reviving old memories, writing facts that will stay forever, has becoming so important.

I would put Daddy, A Bouquet of Memories, as not only a memory but a living history of Brahmapur, facts, one does not get to read in the text book, Wikipedia or any other book about a place or city.

We in India, choose to remember a Gandhi, a Nehru and forget, even, try to wipe out people who we do not want our children to remember as builders of this nation.

Welcome then, to a Nehru look alike and a Gandhi at heart, a generous, kind and benevolent man, called Dr Firoze Ali, The Daddy you may certainly never forget, not if you are from Brahmapur, Orissa.
Posted by Julia Dutta at 4:24 AM No comments:

What goes around comes around.

Starting from Social work in Delhi, Anu Aggarwal’s journey to tinsel town in Mumbai in the late 1980 saw her rise to stardom and super model quite by chance.

In 1990, she became a rave across India and the world - Aashiqui, 1990, with Mahesh Bhatt as Director, turned her into the heart’s desire, both for men, and women. Her nubile body, damsel-in-distress looks pulled the heart strings in every heart and sooner than later, Anu Aggarwal became the actress made to travel across the globe with her stardom. And suddenly from the name on everyone’s lips, she was lost in oblivion. From who’s that girl, she became, where’s that girl? And then people stopped to ask about her any more.

But the famous in the world, don’t make a quiet retreat. Suddenly, out of the blue, she came back from the dead. Indeed, the word dead here, is for real. In a near fatal accident, Anu Aggarwal almost lost her life, breathing in coma for nearly a month! She had multiple fractures when she came to and after many months of healing and repair, she is back again, this time with a Book.

Anusual – Memoir of a Girl Who Came Back from the Dead recounts her life from Delhi as a Social Worker to becoming a glamour super model in Mumbai to becoming a super star in Bollywood, followed by Hollywood and French films too. But it is not only the story of a celebrity film star of the ‘90s, but what does take the reader by surprise is Anu Aggarwal’s engagement with the spiritual. Giving up a life of fame, fags, faqs and fans, she dissolved into a life of absolute abstinence, strict discipline by taking up Yoga at a more than rigorous Ashram in the Himalayas. She spent many years there and then returned to Mumbai, only to be wrecked by an accident that nearly took her life. She emerged from there and went back to where she began – a life working with the less fortunate in the slums of Mumbai, teaching Yoga to a vast many.

What goes around comes around.

The book is written in a matter-of-fact manner with an ample dose of what she was most desired for by both men and women alike, her sensuality and lost looks of a little child, the innocence in her eyes, that drove men and women to fantacise about her; indeed, there is an overdose of sex with men in her book. It carefully conceals what many believe she was a lover of women too.

I have had my doubt too and I wondered if her over engagement with the male gender is her own way to prove to herself that she is not attracted to same sex.

But this, only the reader will know once they read what is concealed within the pages.

Posted by Julia Dutta at 3:15 AM No comments: