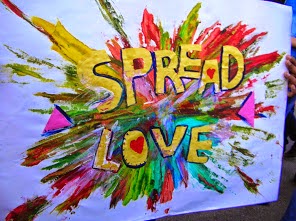 On 10th November, 2014, Midnight Cigarette on Twitter said: “Because we don’t need the state’s consent to fuck each other senseless".
Indeed, on 30th November 2014, celebration, colour, laughter, happiness filled the air as we walked the narrow lanes, shaded and less populated on a Sunday afternoon, to make our presence felt and placed across our demand, our joy and happiness to be Queer.  As usual, the colourful clothing and laughter were lapped up greedily by TV Channels and much noise was created to take our Cause ahead.

Key to the issue of Queer Rights in India is Section 377 IPC which has been revoked by the Indian Legal System. This makes us vulnerable to all forms of abuse all over again. It is not a question of how the state machinery aid to repress us and our desires only; it is not even a question of whom we share our bodies with, and how and with whom we engage in the act of sex with; indeed, it is also how marital rape and abusive anal sex continues to thrive within heterosexual marriages, that the larger implications of not having the Law on our side is actually benefiting the abusers in a really big way, while depriving the queer community their right to contractual marriages/partnerships, which are within the Law and can be dealt with likewise. It is not about recognition only, it is about social status, partnerships and engagement and exchange of love and sex between mutually agreeable adults, with consent.

The Queer Pride March is a cry for recognition, rather than denial of a fact that has existed since ages in India. Supported by Human Rights Organization from across the world, the Indian scene continues to be less than BEST Practices world over. On an individual level across the developed countries in the world, while there may be issues around acceptance, still trickling down from hard cast sections of society, who resist change, in most countries this bonding is celebrated, protected and sanctify by Law. Law, MUST be on our side; recognition will follow.

And this is to be had Here and Now! 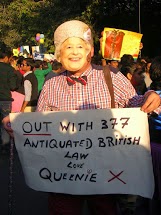 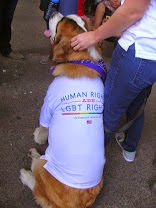 If sex and whom we are attracted to and want to share our bodies with is our individual right, which the state has no right to interfere in, then, Midnight Cigarette on Twitter is right!

Three cheers to #DelhiQueerPride! Live on!

Now gorge on the Photos!
Posted by Julia Dutta at 9:41 PM No comments:

My body; my territory

A few years ago, I watched a show in a small little theatre. The promotional message received promised a play by some very creative people. As it happened, the play ended with a man walking naked from the wings to the front of the stage. The audience watched in silence until the play ended. Then they left, each one lost in the privacy of their own thoughts.

Just a couple of days ago, on a business trip, I was at Sector 127 NOIDA, UP, India and at IHDP building close to HCL, when I chanced upon the image below in the entrance of the building.

Both reminded me of one thing, that being, our bodies are private for each one of us and whether we want to flaunt it or to hide it, is our personal decision to do so, but if we want to flaunt it to a rapt audience, we need to ask permission to do so. While on the one hand it is our right to do what we want with our bodies, but on the flip side, it is also a fact that the viewer may not want to see our bodies at all. That is a possibility. I was deeply offended that in the first case, the actor showed me his body, without asking me, whether I wanted to see his naked body at all. Actually I did not. I had seen a number of naked men – and women, whose bodies I wanted to see and touch, but that was with permission of the person. Here I was forced to see one, I had not asked for.

Women have been shouting that the privacy of their bodies must be respected, which also means, the privacy of their minds. We are at a point where the line of distinction of what is creative and personal, and what is creative and public is losing its boundaries. It is indeed, a bit jarring when, one goes for a professional meeting and finds at the entrance of the building, a sculpture of the nature of the above. Are we to understand that the creative force called sex is a figment of the artist’s mind, or are we to deduce that the sculptor was represented in the horse or the hapless woman - what are we to make of such creative art? And then, the question arises as to why, a corporate house must house this one, when there were other choices too, I am sure.

To a certain extent, what we project in our behavior as artists may be reflective the society we live in, but on the other hand, are these images not responsible too for the increase of atrocities of the ‘powerful’ over the lesser one? Are we, therefore, not in some way responsible too?

That said, let us see what others have to say about it.

Posted by Julia Dutta at 2:19 AM No comments:

Who will save those who can't #kissoflove?

There are two things that keep a living being alive, and those are, love and tons of kisses. I remember how, whenever they could, my family loaded me with kisses, which I quickly shared with my dogs and cats in my childhood.

In recent years, I am keeping the practice alive with these two handsome dudes. (see below)

One really does not know, why people who kiss a lot, never mind other people kissing around them, but those who don’t allow their lips to resemble a ‘duck’s bottom’ and land their lips on another are really those, who are missing out on a huge benefit of being alive and kissing. Apparently, it is all about being and feeling unloved and hence they can't bear to see others #kissoflove. *sigh*

Of the two handsome dudes, visiting me every morning, one of them has even started to talk to me and ask for more. Indeed, he mumbles and rubs himself on my dress to say, I want more. Of course, before the world wakes up, both of us have shared many kisses. The sibling jealousy among the two brothers – and we know that in animal kingdom too, the competition is high for the same woman – is very strong and sometimes there is such a jostle for attention; I am almost on the ground.  Mind you, this is all in the morning and dogs are not lazy louts like humans who can’t rise, even if the sun is high on the sky.

Past our morning #kissoflove, we disperse, each to their own and rarely meet before the next morning.

In animal kingdom, to which we humans belong as homo- sapiens, only we are cuckoo to monitor kiss and label it even as belonging to religious groups. So it intrigues me a lot – what do they do, to show love, I mean those who are against #kissoflove? Are they not the miserable lot, who perhaps have never loved at all?

In which case, we must now name another category of humans who resemble the homo-sapiens, but are after all, not so, because it seems their birth has happened without kissing at all!
To what order they belong, is one of the most profound questions science must quickly seek to answer. And if they were born without their parents showing #kissoflove, then, we must know if they are born out of #kissofdeath.

I pity them. Imagine going through life without knowing the happiness of falling in love with #kissoflove.

Posted by Julia Dutta at 4:12 AM No comments: