My family and other animals Part II 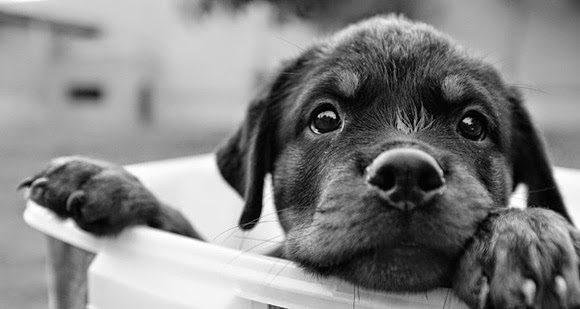 My tears for Tiger had dried up fast, licked away by Bagha’s frequent ‘kisses’. Clumsily I would pick him up only to be smothered with kisses all over my face. In an effort to save my face, I would drop him on the floor and a sharp yelp would denote a hurt little puppy. No sooner though, he would forget his hurt leg and jump behind me wherever I went.

Again, in traditional houses like ours, dogs were not allowed inside the house. They had their own kennel. Bagha and I sat on the steps leading down from the main house, with him brushing hard against my side to engage in talks that only children and dogs do.

“Tomorrow is my birthday, Mamoni said. You must have heard the many things I wanted for my birthday.”

He wagged his tail and stretched his neck to kiss me.

“I am getting a new dress and you a new collar around your neck. Shunu is getting one from Barabazar. It is brown in colour Mamoni said, because, you are shining black.”

Indeed, Bagha was jet black with a wet black nose. Despite the many warnings, including instilling the fear of being sent away to boarding school for kissing his nose, I would always, always kiss his soft black nose, hiding away from elders in the house.

Bagha grew very fast and in a matter of two months, he was a strong big dog who turned out to be possessive and jealous of anyone else who took the attention away from him. Such as the chicken.

We had over fifty white leghorns in our house which lived inside a very large hen pen. Around 9.30 every morning, my mama would go place food in their feeding long dish. You should have seen them at that time. The whole hen pen was full of birds flying and landing up on my mama’s shoulders and head. There was so much sound with all of them calling out at one and the same time that the pandemonium could be heard from the streets way above our house.

Bagha was forever alert at these times. He monitored them from far and in the afternoon when they were let out of the pen to roam around to pick up worms and such things, he chased them endlessly. While the hen and cock scraped the ground with their feet to look for worms, Bagha prepared for the prowl. Slowly and stealthily he approached them like a tiger on his bait and as soon as he was close enough, the hen was alarmed and he began the chase. Mostly, he got one of them by the throat! But he never ate them, he just left them on the floor, his anger and jealousy avenged.

The next day was a day of tomb-like silence in the house, when my angry mama bit his teeth planning for the punishment to be doled out to Bagha.

At last, when I was away at school, my mama did the worst thing any man can do to an animal. It was an act that proved that man is worse than dog, because when dog kill he does it from his natural instinct to prepare for his meal; when man kills an animal, he does it to prove that he is the Lord of the human jungle, which is bereft of all love, loyalty and fellow-feeling.

The day, Bagha was shot dead by my mama’s rifle, Bagha could not rush back to attack my mama – he had been tied to the pomegranate tree by the side of the ‘toilet’ in our traditional home in Shillong.

Bagha died but the guilt of killing his own pet never left my mama, not even after he took sannyas and lived for twenty-five years at the Ramakrishna Mission at Luxa, Banaras, till he died.

I was told by those who were at his bed-side when he was passing on, that he craved to say something, nobody could understand because he was delirious and I wondered if it was a confession he was making to someone.

I also wondered if Bagha was at his bedside, like a true and loyal friend, come to take his Master home?

I would never know, because, I was not there to hear His Mater’s Voice at his dying hour.

Stories from childhood in anticipation of Terry and His Little Brothers