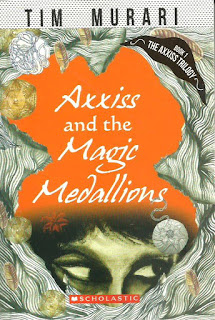 Tim Murari’s second YA fiction, Axxiss and the Magic Medallions, (the first of a trilogy), is a fascination journey of six teenagers from different parts of the world, with one thing in common – they all wear a medallion placed around their necks at different times of their lives, medallions, whose chain does not break and are similar to each other, making the kids, ‘special’.

‘… a massive earthquake, 12.5 on the Richter scale, the largest ever recorded, has struck hundred miles north of the Australian coast in the Pacific and Indian Ocean regions.’ (Pg 11)

This is the beginning of a wild leap of imagination that stretches over time, space, digging up the past, fantastic meeting with world renowned scientist who proved the theory of gravity, and the brilliant development of the story, that makes the six teenagers come together, to solve a common problem.

The problem is as follows: Due to the massive earthquake, Gondwana land, which was buried deep in the ocean for many centuries, has emerged and is threatening to submerge the earth and establish itself in place of the earth. Surrounded by malicious creatures, Gondwana land must be submerged again, in order that the earth may survive. The key to this lies with Axxiss, although he does not know it yet and must wait for the solution, which will emerge from his medallion.

The story moves speedily albeit with a lot of struggle for our young team of six, but nevertheless, they are able to overcome all hindrances and dangers. They have been kidnapped by forces of evil men and women, to meet their end. The boys and girls are away from home and at once desperate to return to where they came from, on the other hand, they must fulfill the task of bring the earth to its rightful place and push Gondwana land back to where it belongs.

Axxiss and the Magic Medallions is a book that can be read at many levels. At the top layer, is this awesome adventure of these six young boys and girls, but beneath that there is another layer, that addresses the young mind of main characters of the book, making it a YA fiction.

There is the third layer as well, which is only revealed in the last and final chapter. And that is a magic number.  Two quotations from the book are critical to what I have just said. They are:

Now, who are the Above Creatures? This will emerge only much later in the book. Axxiss is the chosen one on whose medallion the secret will appear.

Tim Morari leaves his reader with almost a Sudoku, which until solved, the reader cannot put the book down. Thus, shifting the power to the reader, Morari, manages like an astute dramatist to pull his reader into his plot, involving him, engaging him till he has found the answer. He must now join the famous six searching the meaning of those three numbers, put singly, or in a combination, or whatever!

It is a stroke of genius on the author’s part that makes for an end where the main characters and reader together, must to find the solution to save the earth.

Helpful Hint: One of the combinations of the number(s) is a helpful angel. Go wrack your brains over it, now.

About the Author: Timeri N. Murari’s career spans journalism, novels, non-fiction, screenplays and stage plays. Children of an Enchanted Jungle is his first book for Scolastic. He has written novels, including The Taliban Cricket Club, which has been translated in more than 20 languages. His latest novel, Chanakya Returns, was published in 2014. For more, visit his website by clicking on this LINK