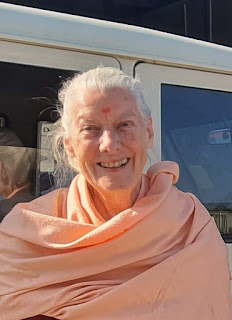 On 20th November 2022, we received a communication which read-

"Ganga Prem Hospice has lost one of its staunchest and most spirited supporters today. Swami Sarvamangalananda of Sivananda Ashram, Rishikesh, breathed her last at Ganga Prem Hospice on the morning of November 19, 2022. Mataji had not kept well for a long time, still she did not miss an opportunity to tell her friends and contacts about the hospice and seek their support. She would make a trip to Ganga Prem Hospice in Raiwala from Rishikesh, whenever she got a chance. Phone calls to the GPH team were a regular feature of her day.

We will miss Swamiji terribly and think of her with fondness and great respect."

I didn't really know her but from Kanchana, who was a good friend of hers, I got to know her in bits and pieces.

Swami Sarvamangalananda of Sivananda Ashram, Rishikesh was an air hostess with Swiss Air, when she met her Guru, Swami Chidananda on flight. This meeting became the turning point in her life and as soon as she could take a voluntary retirement from her job, she did so to travel to India to be with her Guru. As long as Swami Chidananda lived in his body, she stayed close to him as his nutritionist, the Swami having a very weak stomach. She even travelled with him whenever he went to places, in India and abroad.

When Swami Chidananda left his body she continued to live in the Divine Life Sivananda Ashram in Rishikesh. By now, in fact, after a long and difficult struggle, she had even taken on the Indian citizenship. She dedicated her life to the work of Swami Sivananda in mainly the publication, making herself very useful in the Library.

She had in the meantime developed heart problems, which were being taken care of. With age, the problems became more difficult to manage, and on the morning of 19th, November, 2022 at 8.30 a.m or thereabouts, she finally left her body gracefully and with ease and peace.

Two nights before that, she had fallen twice in her room. The helper and his wife who assisted her, bringing her meals from the community kitchen, slept with her in her room. At 4 p.m., the next day, due to detoriating health conditions, it was decided that she would be shifted to Ganga Prem Hospice run by a kind sannyasin lady of British origin, called Nanima. Next day, Sarvamangalananda woke at 5 a.m. and was quite joyful and happy. However, at around 8.30 a.m., she felt a flutter in her heart and it beat slowly till it stopped. There was no pain or discomfort.

Swami Sarvamangalananda had slowly moved into a space beyond time.

Her body was brought back to the ashram, accompanied by two Swaminis and laid in the accompanying room in the hospital attached to the Sivananda Ashram at Rishikesh. A congregation of Swamis and Matajis in orange clothing, sat in vigil around her body, chanting mantras, her ears were so accustomed to hear. Loads of people came to have the last darshan of the Mataji who had now left her body.

Everyone was waiting for Swami Sarvamangalananda's son to arrive from Gurgaon, near Delhi and as soon as he came, the Swamis moved together to a waiting boat which would take Sarvamangala's mortal remains deep into the Ganga, where her body would finally be immersed in the water to float and sink in a free fall..

As soon as her son completed the aarti on his mother, the sanyasini was taken away in the boat with her son and other Swamis. After rowing along a distance, Swami Sarvamangalananda finally immersed in the water and the wayfarers returned to the Ashram.

We never knew each other, except that we saw each other now and then in the Samadhi Hall. She enquired after me to Kanchana, asking what I, Yulia, as she pronounced my name, was doing and how I was passing my time. The answer was the same - that I liked cutting vegetables in the community kitchen and doing my own work in the room.

Alas! I will never hear her voice nor ever get an answer to a question that intrigues my mind - Why do people from the first world come to India, and stay on to become attached to ashrams and gurus? What is it that makes them leave their privileged life there and follow a life of hardships just to be on their Chosen Path?

On 4th December, 2022, is her Shodashi, which is the 16th day after her passing on. A lamp must be lit in my house to signify that she is now The Light, Knowledge, merged with THAT which never is born nor ever dies.

(Disclaimer: Views expressed in this article are totall6 the auther's)

Posted by Julia Dutta at 7:21 AM No comments: 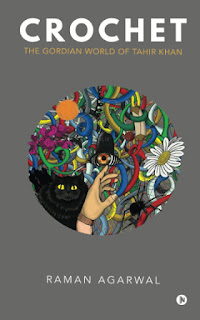 The fact is everyone and his uncle is talking about it. Yet most are afraid of it: worse, in denial of it when it comes to themselves. Indeed, depression may be the new normal, but really it has been there much longer. Schizophrenia, is a still more dreaded word implying much worse mental conditions, but it has been aclose cousin of depression. And the two are best friends to a host of people who go undiagnosed due to lack of knowledge or reasons of stigma associated with both. It was therefore refreshing to read Raman Agarwal’s debut novel, Crochet – The Gordian World of Tahir Khan, which deals with both the above mentioned subjects, in a matter of fact manner. He weaves a complex story of Tahir Khan,who lives in Delhi's Jahangirpuri, where a number of families found refuge when they chose to be in India leaving their homeland in Pakistan. The story runs asa trail of failed love, indeed, one after another, drive Tahir to become a complete recluse. And alone. But his aloneness is not singular to him only. It has a history, running from past to present. The book is a reflection of three lives who are pulled into the well of loneliness, his grandfather, his father,and of course Tahir himself. The cause of this state is even identical. Given this background, Agarwal, weaves a story that challenges facts around these people, whose vision is clouded by fictional characters and conversations with people and circumstances, that don't really exist. But the reader is never lead to the facts until they reach the last part of the book. No wonder for the life of me, I couldn't understand who were Saachi or Ghazal. But I think I understood who Mscavity, the black cat with green eyes was, who kept Tahir Khan company even if all else, deserted him. Written with tender loving care, there is no judgement cast on the characters. As a book on mental health, I would say, Raman Agarwal has done an extremely fine job, with the story. He took ten years to complete the book, which is a lot of time really. The reader can see it coming alive. Tahir is obsessed with his mother, her green scarf being his most beloved security blanket, which he preserves and treasures. His grandfather who lost his wife at childbirth of his only son, Azar, who is Tahir’s father, is devastated and loses his mind in grief. But the same fate is meted out to his son too, but Azar must keep a strong front, because strong man never cry. The emotional overload is palpable, as we readers journey through Tahir’s life. The 280 pages book is very absorbing but way too long and needs editing. The gory details of mental health of Tahir’s grandfather at the end of his life, can be structured differently, incidents in Tahir's own life need to be viewed and edited once again. The super-long descriptions of failed relationships can do with cut-to-size text to deliver the point only. All in all, the book is profound but eats into the reader's time. Therefore, may fail to hold attention, of reader who like it short and crisp like a Jahangirpuri to HUDA City Centre Delhi Metro journey, like one hour forty five minutes, during which if a reader is able to crack the quiz of who is Saachi and Ghazal, in the book, then he’d have got to the crux of the story. Pssst! Ask Mscavity's Tahir’s green eyed cat for help. Publisher: Notion Press (Indie) Pages: 280 Price: Rs. 300 Author: Raman Agarwal Cover: Sanjay Subramanian,
Posted by Julia Dutta at 5:37 AM No comments: